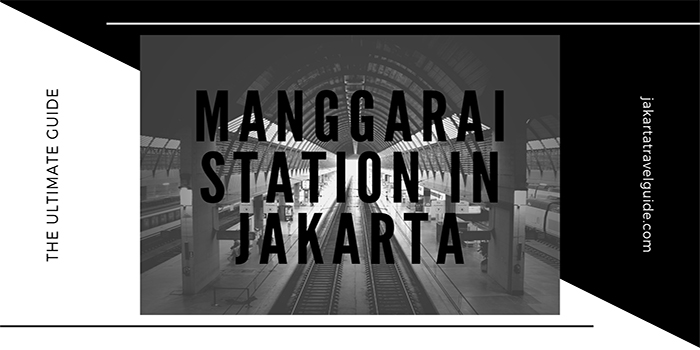 Manggarai Station, locally known as Stasiun Manggarai in Bahasa Indonesia is a commuter train station in Tebet which is an area of south Jakarta.

Manggarai Station is located to the south of Menteng and east of Sudirman.

This is considered to be one of the most strategic stations in the entire commuter system in Jakarta. The main reason for this is that you can transfer between three different lines at Manggarai.

This is pivotal for daily commuters who ride the commuter to and from Jakarta for employment purposes.

Since Manggarai Station is a stop on these three different commuter lines, it is possible to transfer between them if you need to get to a certain location.

Needless to say, Manggarai Station is busy with trains and travelers.

What is located around Stasiun Manggarai in Jakarta?

The direct area around Manggarai Station isn’t known too well for tourist attractions other than Tugu Proklamasi (the Monument of the Proclamation).

It can be a strategic area to stay if you need to travel to both the south (maybe to Bogor) and north areas (maybe Kota Tua) of Jakarta.

There is a convenient shopping mall near Manggarai Station called Pasaraya Manggarai. From the station it is 600 meters to the mall.  This should take you only about 7 minutes to walk there.

Despite there not being too many attractions within walking distance of Manggarai Station there is a high quality hotel not too far away.

Yellow Hotel Manggarai is one of the most positively reviewed and well-priced 3-star hotels in all of Jakarta. It is only an 850 meter walk from Manggarai Station which should only take you only about 10 minutes to walk there. If you are thinking about staying in this area of Jakarta this property is something to consider.

Driving from Manggarai Station to the Airports in Jakarta

The driving distance from  Manggarai Station to Soekarno-Hatta International Airport is around 33 kilometers and this should take you around 50 minutes to 1 hour and 5 minutes depending on traffic.

Getting from Stasiun Manggarai to Halim Perdanakusuma

The driving distance from Manggarai Station to Halim Perdanakusuma International Airport is around 10 kilometers and this should take you around 25 minutes to 40 minutes depending on traffic.