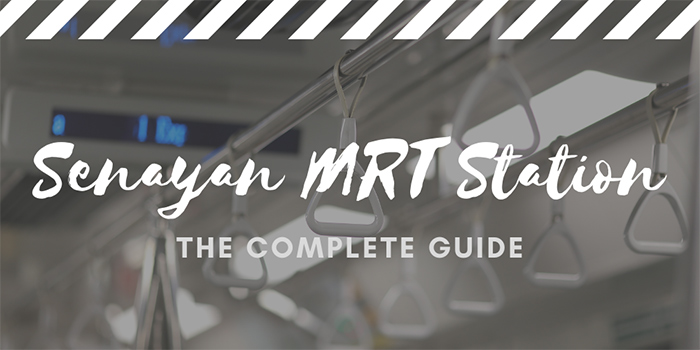 The complete guide to Senayan Station in Jakarta. Find out everything you need to know about using MRT Jakarta.

Senayan MRT Station is an MRT station along the M1-North South MRT Line in Jakarta. This Jakarta MRT Line is the first of its kind in Indonesia.

The M1-North South MRT Line consists of 13 stations in total which are set to open in 2019.

Eventually, Jakarta MRT will be extended all the way up to Kota Tua.

Senayan MRT Station is the 5th station south of Bundaran HI and it is situated 6.5 km south the Monas.

Of the 13 stations making up the M1 Line, this is one of six stations that are constructed underground. The southernmost seven stations are built ‘above ground’.

Senayan is a modern area of Jakarta with large skyscrapers, luxury hotels and various shopping malls. It makes sense that the MRT is underground in this area to reduce traffic congestion.

Senayan MRT Station has neighboring stations – one to the south and one to the north.

If you are traveling north from Senayan in the direction of Bundaran HI, the next station that you will stop at is Istora MRT Station.

Istora MRT Station is the gateway to the national sports complex where international competitions take place.

The distance between Senayan MRT Station and Istora MRT Station is only about 800 meters. This is one of the shortest trips on Jakarta’s MRT. It’s so short that you might want to consider walking between the stations opposed to waiting for the next train.

If you are traveling from Senayan MRT Station south towards Lebak Bulus MRT Station, the next station you will stop at is Sisingamangaraja MRT Station.

The distance between these two stations is 1.5 km. As you travel between Senayan and Sisingamangaraja you will make a transition from underground to above ground (or vice versa).

Bundaran HI will no longer be a terminal station when Phase II of Jakarta MRT construction is completed (but that will take a while).

Senayan MRT Station is the 7th station north of Lebak Bulus and the 5th station south of Bundaran HI.

The track distance from to Bundaran HI MRT Station to Senayan MRT Station is approximately 10 km.

Senayan MRT Station is part of the first-ever MRT Line in Jakarta (and Indonesia).

You are going to have to wait a very long time before there is the chance to transfer to another MRT Line here.

Consider using alternative forms of transportation such as TransJakarta, a taxi, Go-Jek or Grab.

What is around Senayan MRT Station?

Senayan MRT Station is located in one of the best areas to stay in all of Jakarta.

The station itself is located near many of the best luxury hotels in the city.

Also let’s not forget about the world-class malls, restaurants, clubs, and pubs within a few kilometers of the station as well.

If you are visiting Jakarta, highly consider staying in this area due to its central location and convenience to sights in central and south Jakarta.

There are four shopping malls within less than a kilometer from Senayan MRT Station:

Therefore, if you like shopping you will have no shortage of selection. Great dining options as well.

Pacific Place (one of Jakarta’s best luxury malls) is also only a 1.5 km/22 minute walk away from the station. Ratu Plaza is a computer mall that is right beside the station. You can walk there in under 2 minutes.

The entrance to the national sports complex (Bung Karno) is only 1 km northeast of Senayan MRT Station, which makes it convenient for watching international athletics competitions.

The Indonesian Stock Exchange and many of the large corporation buildings are clustered only about 700 meters north of the station, which makes it convenient for visitors conducting business in the CBD (central business district).

There is a large selection of high-quality accommodation choices near Senayan MRT Station.

One of the best hotels in the entire city, the Fairmont Jakarta Hotel, is only a 750 meter/9 minute walk from the station.

Two other very convenient and popular hotels that you might want to consider are:

The Ritz-Carlton Jakarta, Pacific Place is without question one of the best hotels in the city, but it is also physically attached to Pacific Place Mall. This is a convenient and practical choice if you have the budget.

HARRIS Suites fX Sudirman is physically attached to fX Sudirman, but also right beside the entrance to the sporting complex. Therefore, if you want to shop or watch a competition, you won’t have to travel very far.  You can walk.

The area around Senayan MRT Station looks modern with large skyscrapers and cutting-edge condominiums, but it isn’t for everyone.

Other Shopping Options a Few Stations South of Senayan

If you want cheaper malls and cheaper hotels to choose from, consider traveling two stations south on the MRT to Blok M MRT Station.

The malls in Blok M tend to focus on textiles and cheap electronics.

If you travel from Senayan north on the M1 MRT Line, you will stop at Istora MRT Station. This will bring you right beside the sports complex and the main cluster of the central business area in Jakarta.

Since these stations are only 800 m apart. You can even walk between them if you want to burn some calories.

Driving from Senayan MRT Station to the Airports in Jakarta

Getting from Senayan MRT Station to Soekarno-Hatta

The distance from Stasiun MRT – Senayan Station to Soekarno-Hatta International Airport is 31 kilometers and it will take you around 40 minutes to 55 minutes.

Getting from Senayan MRT Station to Halim Perdanakusuma

The driving distance from Stasiun MRT – Senayan Station to Perdanakusuma International Airport is around 15 kilometers and this should take you around 30 minutes to 45 minutes.