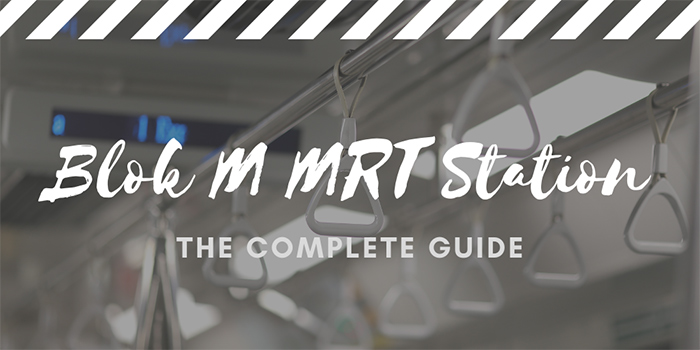 Everything you need to know about Blok M Station in Jakarta.

The M1-North South MRT Line consists of a total of 13 MRT stations covering an approximate distance of 15.7 km. The northernmost stations have been built underground throughout more modern areas such as Senayan, Sudirman, and Thamrin.

Blok M MRT Station is not one of these. Instead, it is built above ground in a similar fashion to the other seven southernmost stations making up this MRT Line. 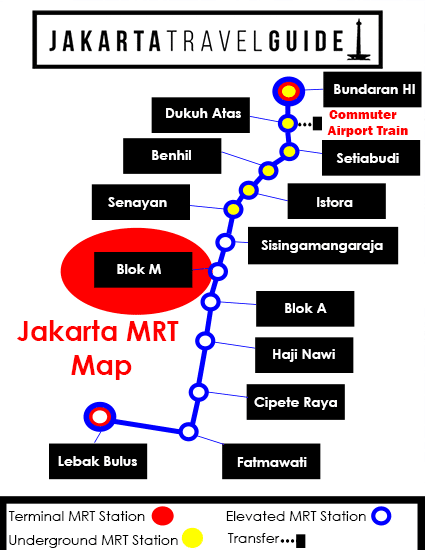 If you are starting your journey from Blok M MRT Station, and intend on traveling south, the next closest station that you will stop at is Pasar Blok A. The distance between Blok M and Pasar Blok A is approximately 1.2 km.

In the opposite direction from Blok M MRT Station, you can expect your stop to be at Sisingamangaraja to the north. This is one of the shortest trips in Jakarta’s MRT system.

The distance between Blok M and Sisingamangaraja MRT Station is only about 750 meters. They are so close you could walk between the two stations.

Blok M MRT Station is almost in the middle of these two along the M1 Line.

The distance between Lebak Bulus and Blok M Station is 8 km.

If you are starting your trip from the northernmost point of the M1 North-South Line at Bundaran HI MRT Station, the distance to Pasar Blok M is about 7.5 km.

Blok M MRT Station is part of the first-ever MRT Line in Jakarta, and Indonesia for that matter! Therefore, it won’t be possible to transfer to another MRT line while you’re at Blok M.

Expect it to be this way for a lengthy period of time.

If you get off at Blok M, try to take the bus (TransJakarta) or arrange a ride with Go-Jek, Grab or with a taxi.

What is around Blok M MRT Station?

The area around Blok M MRT Station is called Blok M. This is very popular with Jakartans for shopping!

Actually, Blok M is one of the best budget shopping areas in all of Jakarta.

Of all of the MRT stations making up the M1 Line, Blok M could be one of the most convenient for accessing nearby restaurants, bars, malls, and public parks.

Once you get out of Blok M MRT Station immediately to the west is Plaza Blok M – one of the various malls around the station.

Within a few hundred meters of the station, you can also access the following shopping centers that are literally adjacent to one another:

These shopping centers tend to have excellent prices in comparison to many of the more modern malls in Jakarta.

Plaza Blok M is now physically connected to the MRT Station! Consequently, it has become extremely popular since the MRT Line opened up. All you have to to is exit the northwestern corner of the station and you will find a small pedestrian bridge. You can walk to the mall in 1 minute from Blok M Station.

Pasaraya Blok M is another mall that many tourists visit. It has an impressive selection of Indonesian arts and crafts that are popular with visitors and expats in the city.

The streets surrounding these malls are lined with restaurants and pubs. There are quite a number of Korean and Japanese restaurants in this area.

Many visitors to the city visit Blok M for the shopping. Therefore, there are also plenty of accommodation choices nearby that tend to be of good value as well.

Expect most properties to be in the 2-3 star range.

Two of the best, and most positively reviewed properties around Blok M MRT Station include:

They aren’t the closest to the station, but they are both well-managed properties with high service standards.

If you are not concerned about quality, but rather convenience, then here are some of the closest properties relative to Blok M MRT Station:

The area around Blok M MRT Station also has some quality public parks not too far away. The largest of these is Taman Langsat.

Two other smaller parks near the station are Taman Ayodya and Taman Martha Tiahahu (the closest to the malls in Blok M).

Another point of interest worth checking out if you arrive at Blok M MRT Station is Pasar Mayestik.

Pasar Mayestik is one of Jakarta’s best textile market areas, with an abundant amount of Batik. It is particularly popular with Jakartans. Pasar Mayestik is about 1.4 km northwest of Blok M MRT Station. This should take you 20 minutes to walk or 10 minutes to drive from the station.

Taman Puring Market is only a few minutes away from Pasar Mayestik. It has some shoes and clothing if that’s what you are looking for.

The area around Blok M MRT Station might not be the most scenic area in Jakarta, but it is an affordable place to stay with some of the most convenient shopping opportunities in the entire city.

Driving from Blok M MRT Station to the Airports in Jakarta

Getting from Blok M MRT Station to Soekarno-Hatta

The distance from Stasiun MRT – Blok M Station to Soekarno-Hatta International Airport is 37 kilometers and it will take you around  45 minutes to 1 hour.

Getting from Blok M MRT Station to Halim Perdanakusuma

The driving distance from Stasiun MRT – Blok M Station  to Perdanakusuma International Airport is around 15 kilometers and this should take you around 30 minutes to 45 minutes.