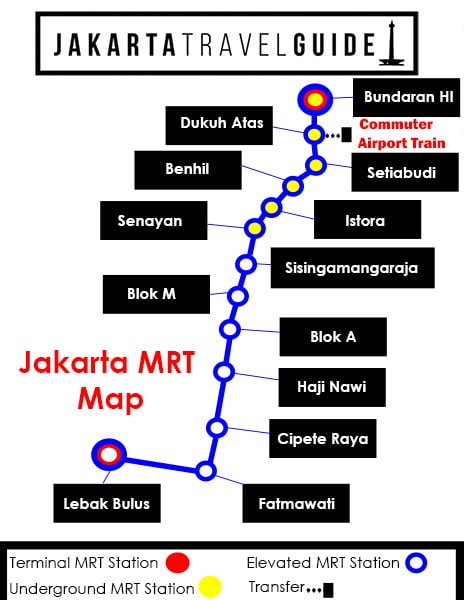 This is a clear MRT Jakarta Map which is designed to make your planning easier. MRT Jakarta is now officially open to the public in Jakarta! The MRT Jakarta Map (to the right) summarizes the stations making up Jakarta’s first MRT Line.

As the Jakarta MRT map illustrates, there are a total of 13 MRT stations that are part of the North South Line.

The 6 northern stations that are located in central Jakarta have been built underground. Therefore, you will either walk downstairs or take an escalator to access the MRT.

On the Jakarta MRT Map to the right,  these underground stations are represented with a solid yellow circle .

The 7 southern stations are elevated. They have been constructed above the existing road infrastructure in south Jakarta.

On the Jakarta MRT Map above, these elevated stations are represented by an empty blue circle.

On the Jakarta MRT Map illustrated above these are denoted with a red circle.

This map of Jakarta MRT will be updated when Phase II of construction is almost complete.

Currently, it isn’t possible to transfer to another MRT line from this one. Therefore, if you get off at one of the MRT stations in Jakarta, you will have to consider one of the following forms of transportation:

Dukuh Atas MRT Station is the most connected station along the M1 North South MRT Line. It is a convenient station to stay near while Jakarta because you can walk to other commuter stations, the Airport Railink, and eventually the LRT (the LRT isn’t open yet).

When you arrive at Dukuh Atas MRT Station, you can walk to the following stations:

The Jakarta MRT map above shows that you can transfer to the commuter and airport train with three black dots and a square box attached to Dukuh Atas MRT Station.

Future Updates to this Map of Jakarta MRT

This Jakarta MRT map will be updated when the Jakarta LRT system officially opens in the city. Similarly, you can expect it to be updated well before the Phase II of MRT construction is finished.