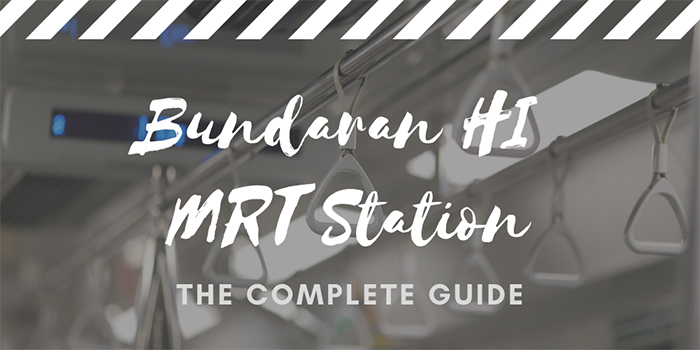 The complete guide to Bundaran Station in Central Jakarta. Learn how to use MRT Jakarta, fast.

Bundaran HI MRT Station is arguably the most convenient station in all of Jakarta for sightseeing. It is only 2 km south of the Monas – Indonesia’s National Monument and within walking distance to some of Jakarta’s best hotels and shopping malls.

The six northernmost stations are built underground through the central business area where there is more modern architecture and road networks.

The seven southernmost stations have been built above ground through some of the older areas of the city.

Bundaran HI MRT Station is underground and it’s the starting point for passengers travelling from central Jakarta to south Jakarta.

What is around Bundaran HI MRT Station?

The direct area around Bundaran HI MRT Station is largely considered by many as one of the best places to stay in all of Jakarta!

Within a few meters from this station, you will find some of the best malls and hotels in the entire city, and also extremely convenient access to the Monas and other attractions in central Jakarta.

Directly south of the station is Bundaran HI – one of the most iconic symbols of modern Jakarta.  This is a famous roundabout that has the Selamat Datang Monument (also called the Welcome Monument) centered in the middle of the roundabout.

This roundabout is called Bundaran HI because ‘bundaran’ means ‘roundabout’ in Bahasa Indonesia, and the acronym HI stands for Hotel Indonesia. This is an appropriate name because some of Jakarta’s best and most positively reviewed hotels surround the roundabout.

To the south of the Monument is the Mandarin Oriental Hotel – one of Jakarta’s best 5-star luxury hotels. It commonly receives 9/10 review scores (or higher) on international booking sites.

To the west of Bundaran HI is Hotel Kempinski Indonesia. This is also a superb 5-star hotel with excellent reviews on all large booking sites.

But these are not the only properties there. To the northwest of the roundabout is the Grand Hyatt and Keraton at The Plaza a Luxury Collection Hotel Jakarta. Both of these are excellent 5-star options for visitors to Jakarta.

The most affordable hotel located beside Bundaran HI is the Pullman Jakarta. It is located to the northeast of Bundaran HI and the Welcome Monument. You can walk to any one of these hotels within 1 minute of the Bundaran HI MRT Station.

If you stay near Bundaran HI MRT Station you will be able to access some of the besthotels in all of Jakarta,but you will also only be a few hundred meters away from Grand Indonesia, Plaza Indonesia and Thamrin City – three very popular malls in central Jakarta.

As its name suggests, Grand Indonesia is massive, and it’s definitely one of the most popular malls with foreign and domestic tourists visiting Jakarta.

If you plan on shopping there it makes the most sense to stay at Hotel Kempinski Indonesia since they are physically connected to each other.

Plaza Indonesia is directly north of Grand Indonesia. You can walk between them in 1-2 minutes. It has a large selection of luxury brands.

If you want to shop at Plaza Indonesia, the two most convenient places to stay are Keraton at The Plaza a Luxury Collection Hotel Jakarta and the Grand Hyatt Jakarta. They are both physically attached to the mall.

Of the three shopping malls within walking distance of Bundaran HI MRT Station, Thamrin City is by far the most affordable choice for budget-conscious shoppers.

You can stay at the Ascott Jakarta if you want to be situated between Grand Indonesia and Thamrin City during your stay in Jakarta.

Staying near Bundaran HI MRT Station will also provide you will convenient access to some of Jakarta’s most famous public parks – Taman Suropati, Taman Menteng and Taman Situ Lembang.

They are located east of the station in Menteng.

You should also consider checking out Jalan Surabaya Antique Market if you are in Menteng.

With Bundaran HI MRT Station being located only around 2 km south of the Monas, you can easily access Indonesia’s National Monument as well as other worthy attractions such as:

If you want to explore other areas south of Bundaran HI MRT Station then you can easily access areas such as Senayan, Sudirman and Blok M by using the M1 North South MRT Line.

Therefore, to summarize, the area around Bundaran HI MRT Station is one of the most convenient places to stay in all of Jakarta.

You will have convenient access to southern destinations using the MRT. It is ideally located beside some of the best hotels and malls within the city that are only 2 km south of the Monas.

Bundaran HI MRT Station only has one neighbouring station to the south because it is the terminal station on the M1 North South MRT Line.

The distance between Bundaran HI and Dukuh Atas is approximately 1 km.

You shouldn’t expect another neighbouring station (to the north) until the second phase of the North South Line has been completed (which is expected to be not until at least 2025).

The M1 North South MRT Line consists of 13 stations, therefore, if you travel from Bundaran HI to Lebak Bulus, or vice versa, you will make 11 stops prior to arriving at the other terminal station.

The total line distance at this point in time (before the second phase is completed) is 15.7 km.

Currently, there is only one MRT built in Jakarta. There are no other possible MRT Lines to transfer to when you arrive at Bundaran HI MRT Station.

You can, however, travel one station south to Dukuh Atas MRT Station to access the KRL Commuter (Sudirman Station), Airport Railink (BNI City Station) and the LRT (when it opens).

If you want to travel to the Monas from Bundaran HI consider other forms of transportation such as TransJakarta, Go-Jek, Grab or taxi.

Driving from Bundaran HI MRT Station to the Airports in Jakarta

Getting from Bundaran HI MRT Station to Soekarno-Hatta

The driving distance from Stasiun MRT – Bundaran HI Station to Soekarno-Hatta International Airport is 28 kilometers and it should take you around 50 minutes to 1 hour and 5 minutes.

Getting from Bundaran HI MRT Station to Halim Perdanakusuma

The driving distance from Stasiun MRT – Bundaran HI Station to Perdanakusuma International Airport is around 18 kilometers and this should take you around 35 minutes to 50 minutes.