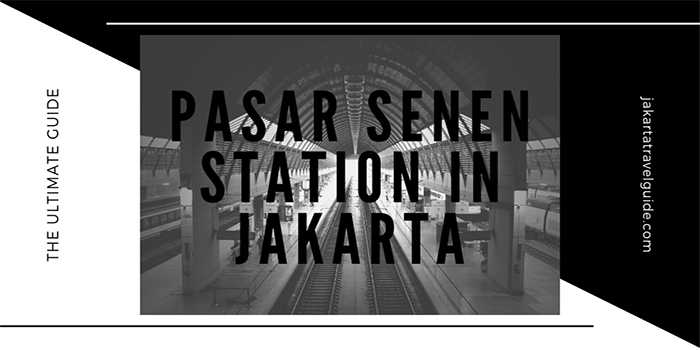 This makes with within convenient distance from some of Jakarta’s best museums, galleries, restaurants and hotels.

Pasar Senen Station is a stop on Jakarta’s Yellow commuter Line that connects Jatinegara Station in east Jakarta, with Bogor, Depok and Nambo in the south.

Pasar Senen Station is the fifth stop on the Yellow Line north of Jatinegara Station.

If you wish to reach either the Red Line or the Blue Line, you can do so by travelling south to to Jatinegara Station.

Once you arrive at at Jatinegara Station you can change to the Blue Commuter Line which services trains to Kota Tua (in the north) and Bekasi (in the south).

If you want to transfer to the Red Commuter Line or connect again with the Yellow Line, then go south to Jatinegara Station and then travel west one station to Manggarai Station.

From Manggarai Station you can travel directly south to Bogor, Depok and Nambo.

What are the closest stations to Pasar Senen Station?

If you are travelling north on the Yellow Line towards Ancol, then the next station is Kemayoran Station.

Kemayoran Station is only around 1.5 kilometers away from Pasar Senen Station.

If you are travelling south, the closest station to Pasar Senen Station is Gang Sentiong Station.

The distance between Pasar Senen Station and Gang Sentiong Station also about 1.5 kilometers.

What is located around Pasar Senen Station?

Pasar Senen Station is named after Pasar Senen. If you are not familiar, the word ‘pasar’ means market in Bahasa Indonesia.

It is only about 3 kilometers directly east of the Monas. Therefore, if you stay near the Station you can walk to the Monas in about 30 minutes, or drive in just over 10 minutes.

The local traditional markets are located only about 300 meters southwest of Pasar Senen Station. Although locals generally tend to call the whole shopping area Pasar Senen, there are more specific names for the markets there.

Proyek Senen Market (or Pasar Proyek Senen) is a large bustling indoor market that is only a 3 minute walk from the station.  Once you are there, you will have no problem walking to all the smaller markets in the surrounding area. Again, it’s probably just easier and more practical to consider the whole area as one market. Just make sure that you’re ready for bargaining!

Although the area around Pasar Senen Station is quite local, as you move further west towards the Monas you will be able to visit some of the more popular international attractions in Jakarta. The National Gallery of Indonesia, Gedung Pancasila, Istiqlal Mosque, Jakarta Cathedral, Museum of National Awakening and Pasar Baru are all popular attractions under 3 kilometers away from the station.

There are quite a few accommodation options near Pasar Senen Station, but they are not generally the best choices in the area.

If you decide to stay a bit closer to the Monas you will have a much better range of positively reviewed properties to choose from that are also closer to restaurants and shops.

If you would prefer not to deal with Jakarta’s traffic also consider just taking the commuter line one station north to Kemayoran Station. From there, it’s only about 300-400 meters from Pasar Baru – one of Jakarta’s most famous market areas.

Driving from Pasar Senen Station to the Airports in Jakarta

The driving distance from Pasar Senen Station to Soekarno-Hatta International Airport is around 31 kilometers and this should take you around 50 minutes to 1 hour 5 minutes depending on traffic.

Getting from Stasiun Pasar Senen to Halim Perdanakusuma

The driving distance from Pasar Senen Station to Halim Perdanakusuma International Airport is around 16 kilometers and this should take you around 35 minutes to 50 minutes depending on traffic.