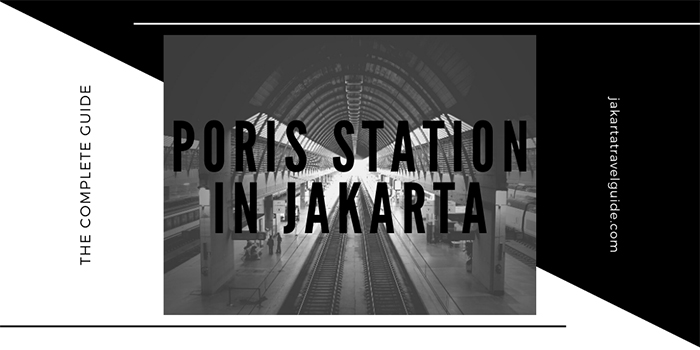 Poris Station, also locally called Stasiun Poris in Bahasa Indonesia is a commuter station which is located about 18 km west of the Monas and other prominent attractions in the central region of Jakarta.

It is just far enough west to be considered part of Banten, and not Jakarta.

Poris is the seventh station on the Brown Commuter Line if you are starting at Duri Station and travelling in the western direction towards towards the terminal stop on the Brown Line, Tangerang Station.

Due to its located being quite far from central Jakarta, it isn’t possible to directly transfer to another commuter line once at Poris Station.

Instead, you will have to head east all the way to Duri Station. Once at Duri, is it possible to transfer to the Yellow Line which services trains that run south to destinations such as Depok, Bogor and Nambo.

The Yellow Line helps many commuters in Jakarta bypass heavy traffic to these destinations in the south.

Alternatively, you can also travel north on the Yellow Line before it loops around to eastern Jakarta. If you travel north from Duri Station you will travel close to Ancol (one of Jakarta’s most popular theme parks) and reach popular market areas such as Pasar Senen and Jatinegara.

Both of these markets are within close walking distance of their respective commuter stations.

If you happen to be at Poris Station, then the next closest station to the west (towards Tangerang) is Batu Ceper Station.

The distance between these two is about 1.8 km.

If you move in the opposite direction towards central Jakarta and Duri Station the next closest station to Poris is Kali Deres Station.

The distance between Poris Station and Kali Deres Station is around 2.5 km.

Expect it to take a bit longer to reach Kali Deres Station.

What is located around Stasiun Poris?

Due to its proximity in Banten, do not expect very many tourist attractions or tourists around Stasiun Poris.

There are a few local traditional Indonesian markets not too far from the station though.

Traditional Market Poris Indah is probably the most interesting market to check out. It is about 1.5 km southeast of the station.

There are also a few patches of green space near Poris Station which is rare to see around Jakarta. Since this is quite far west it starts to feel more like a village area opposed to a city.

The Giant Eskpres Supermarket is also popular with local shoppers for groceries and day-to-day goods. It is only about 650 meters from the station.

Staying in this area can be a bit of challenge for domestic and international tourists.

There are very few quality accommodation options in this part of Banten, and very few tourist friendly services available.

If you are looking to stay somewhere you might want to consider the following properties:

All of the distances listed above are in relation to the station. These properties all get okay reviews with guests.

If you are looking to stay in Jakarta’s city center then consider staying close to Thamrin, where popular hotels such as The Grand Hyatt, The Pullman, Hotel Kempinski Indonesia and the Mandarin Oriental are located.

You will find much better amenities and a much larger selection of restaurants as you get closer to the Monas area.

Driving from Poris Station to the Airports in Jakarta

Getting from Stasiun Poris to Soekarno-Hatta

The driving distance from Poris Station to Soekarno-Hatta International Airport is around 13 kilometers and this should take you around 35 minutes to 50 minutes depending on traffic.

Getting from Stasiun Poris to Halim Perdanakusuma

The driving distance from Poris Station to Halim Perdanakusuma International Airport is around 40 kilometers and this should take you around 1 hour to 1 hour and 15 minutes depending on traffic.