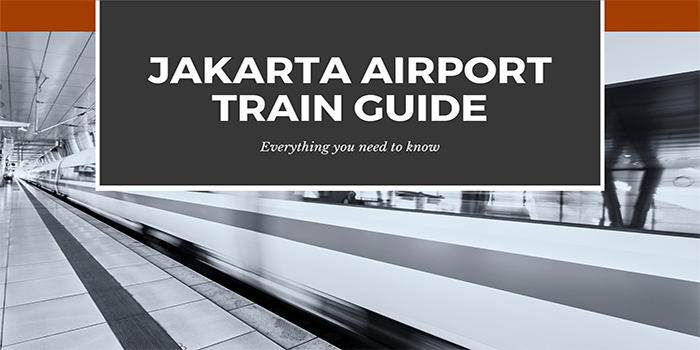 Everything you need to know about getting to/from Jakarta’s Airport by Train using the Soekarno-Hatta Railink.

Welcome to the most comprehensive Jakarta Airport Train Guide. This detailed guide is designed to make it extremely easy for you to get from Soekarno-Hatta International Airport to Central Jakarta by train (or vice versa).

You will find this information especially important if you are landing in Jakarta at a busy time. As you have probably heard, Jakarta’s traffic can be terrible. Fortunately, there is now a train from the airport to central Jakarta. This provides you with an alternative option for getting to Jakarta from the airport.

The first thing that you need to know is that the train from Jakarta’s airport to the city is called the ‘Railink’.

Railink is actually an airport train operator and a subsidiary of PT Kereta Api Indonesia and PT Angkasa Pura II. They also have developed a rail train in Medan. Few visitors will call it ‘Railink’ so for the sake of this article we will use the terms ‘Airport Train’ and ‘Railink’ interchangeably.

They both refer to the train from the airport to Jakarta.

Why should you consider taking the train from the airport to central Jakarta?

The airport train in Jakarta opens up some new options for visitors and locals living in the city.

Previously, you had the choice of a taxi, private car (Go or Grab) or a bus from the airport to central Jakarta. At times these options are actually suitable. If you arrive really late at night (like after 10:30 pm) it is possible to land in Jakarta and drive to the city center without heavy traffic.

But if there are any accidents, heavy rain or just unexplainable heavy traffic, then these rides can take hours! Two or three hours is possible.

If there is no traffic you can reach Jakarta’s city center in 35 to 45 minutes by car.

So, the first obvious reason why you might want to take the airport train from the airport to Jakarta is to avoid heavy traffic.

The airport railink in Jakarta takes about 40 minutes to reach the city center. Therefore, you don’t have to worry about unforeseen traffic jams along the way. This makes it a much more relaxing, and safer option than driving.

It is also much more environmentally friendly.

Jakarta airport train has a daily seating capacity of 33,728 passengers/day. Although this number would rarely be met, this keeps a lot of vehicles off the road. Fewer vehicles mean less harmful emissions from vehicles.

Jakarta has poor air quality and taking the train is one way to help.

People conducting business in Jakarta will also appreciate the free wifi and USB port plugs on the Railink trains from the airport. You can get some extra work done without getting motion sickness like in a car.

Getting from Airport Terminals (1, 2, and 3) to Soekarno-Hatta Train Station

After you land at Soekarno-Hatta International airport pick up your luggage and pass through customs.

There are signs in each airport terminal to direct you to the Skytrain.

The Skytrain is a short rail line that you can use to get to Soekarno-Hatta Train Station (also known as Soekarno-Hatta Integrated Airport Railway Station, or SHIA for short).

The Integrated Airport Railway Station is located between Terminal 1 and Terminal 2 at Soekarno-Hatta International Airport. This is where you need to go to travel by train from the airport to central Jakarta.

Once you arrive at the integrated building you can transfer from the Skytrain (on the top floor) to the Railink (located on the bottom floor).

Once you are at Soekarno-Hatta Airport train station you need to get your ticket to central Jakarta.

It is also south of some of Jakarta’s best hotels such as:

Once you arrive at BNI City Station you can walk to Dukuh Atas MRT Station to access Jakarta’s MRT network. Go from Dukuh Atas Station to the Monas area by taking the MRT one station north to Bundaran HI MRT Station.

If you want to go to the central business area (SCBD) then travel to Istora MRT Station from Dukuh Atas. It is located directly across from:

You can also walk from BNI City Station to Sudirman Station.

Sudirman Station is part of the commuter network in Jakarta. This network is extremely popular with local commuters living in Jakarta’s neighboring satellite cities such as Bogor and Depok.

Some of the stations such as Duri and Batu Ceper are integrated with the pre-existing Jakarta KRL Commuter System. Therefore, they were already built before the idea of the airport train was even thought of.

You can click on the following station article links to find out specific information about each one:

The airport train service in Jakarta opened in late 2017. It has been operating ever since.

How long does it take to take the train from the airport to central Jakarta?

Usually, it takes about 40-45 minutes to get from Soekarno-Hatta Train Station to BNI City Station in central Jakarta.

This time could change by a few minutes but in most cases it is around 45 minutes.

Expect it to take about 45 minutes in the opposite direction from central Jakarta to the airport by train as well.

How much does it cost for each trip on Jakarta Airport Train (Railink)?

Jakarta Airport Train has already changed prices a few times since the service began. Initially, it was 100,000 IDR per trip to/from the airport. After a while, it was reduced to 70,000 IDR per adult per trip.

Currently, the regular price to get from the airport to central Jakarta or vice versa is 70,000 IDR. But it is possible to get cheaper tickets if you are a frequent user.

Perfeq Riders (personal frequent riders) can save considerably by using the airport train in Jakarta. Currently, the prices are:

This is the promotional website page that describes how you can get these discounted rates.

What services are available on the trains from the airport to/from central Jakarta?

According to Railink, each airport train has the following services:

Where is the schedule for the train from the airport to Jakarta?

Where can you buy tickets for the airport train in Jakarta?

There are multiple ways to pay for tickets from the airport to/from central Jakarta. You can buy tickets at:

As you can see there are many ways to pay for tickets (maybe too many!!). The easiest way is just showing up at Soekarno-Hatta Station or BNI City Station and just buying a ticket there. If you live in Jakarta, consider getting a card to avoid lineups and the constant need to use cash.

How early should you arrive at the station before the airport train departs?

Boarding for the train ride to/from central Jakarta begins 15 minutes before the scheduled departure time. Make sure that you arrive early so that you have time to transfer your luggage to the train.

***Read more about accommodation choices near each MRT Station with this detailed MRT Accommodation Guide.

There is no denying the fact that the airport train in Jakarta is a good thing for the city. It is more environmentally friendly and stress-free in comparison to driving. It also allows passengers to get some work done while commuting to/from the city center. Although this detailed guide includes most of the information that you will need to take the train from the airport to Jakarta, please send us an email if you require additional information.