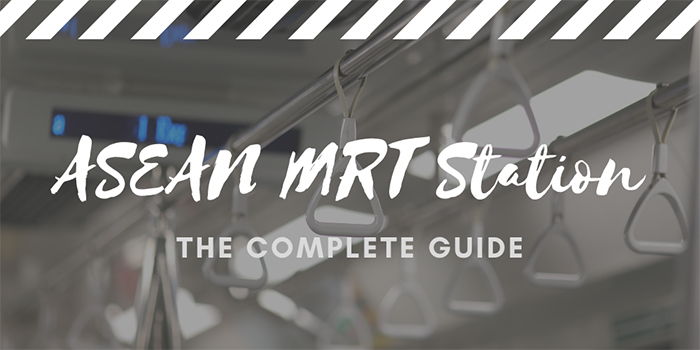 The complete guide to ASEAN Station in Jakarta. Find all the information you need, and fast.

To help place the location of ASEAN MRT Station into context, it is situated in Kebayoran Baru, South Jakarta. This is an area about 7.8 km south of the Monas and 5.8 km south of Bundaran Hotel Indonesia.

ASEAN MRT Station is the last above-ground station before this MRT line transfers underground all the way north to Bundaran HI MRT Station.

It travels underground through Jakarta’s more modern areas such as Senayan, Sudirman and Thamrin.

ASEAN MRT Station has two neighboring stations that are located within some of Jakarta’s most popular shopping areas – Blok M and Senayan.

Blok M MRT Station is the closest station south of ASEAN MRT Station. The distance between these two stations is only 750 m.

You can walk between these stations if you don’t feel like waiting for the next train!

If you are starting your trip from ASEAN MRT Station and plan on traveling north, the next closest station that you will stop at is Senayan MRT Station. The distance between ASEAN and Senayan is around 1.5 km.

You can easily walk from Senayan MRT Station to various shopping malls.

Therefore, you make the same number of stops on your way to ASEAN regardless of which terminal station you start at.

ASEAN MRT Station is part of the first-ever MRT Line in Jakarta – the M1-North South Line.

There are no other MRT Lines that are developed yet, therefore you are going to have to wait many years before there is a chance of having another MRT Line near ASEAN MRT Station.

You can try taking TransJakarta, Go-Jek, Grab or a taxi once you arrive at the station.

What is around Stasiun MRT ASEAN?

Most of the best things to do in this area are clustered around ASEAN’s neighboring stations opposed to itself.

The station is located within a few kilometers of two of Jakarta’s best dining streets which are dotted with excellent restaurants – Jalan Gunawarman and Jalan Senopati.

The immediate area around the ASEAN MRT Station mainly consists of government offices, sports complexes, schools, and residential space. There is also a museum called Museum Polri that is situated about 300 meters east of the station. This is a police museum that has really interesting artifacts to check out.

To the north on the way to Senayan, there is a nice park called Taman Mataram. It is 800 meters north of ASEAN MRT Station which should take you 10 minutes to walk there.

ASEAN MRT Station is also quite close to some of the best hotels in all of Jakarta.

The Fairmont Jakarta Hotel is only a 2.8 km/9 minute drive from the station. This is consistently rated as one of the best 5-star hotels year-after-year.

Another excellent hotel is The Gunawarman. It is slightly closer to the station (2.5 km/7 minute drive). It is surrounded by great restaurants.

Some other positively reviewed properties within 3-4 km of ASEAN MRT Station are:

Keep in mind that all stated driving distances are relative to ASEAN MRT Station.

Getting to Shopping Malls from ASEAN Station

If you are at ASEAN MRT Station highly consider either taking the MRT one station north (to Senayan) or south (to Blok M).

Senayan has some popular malls such as Plaza Senayan, Senayan City and Ratu Plaza.

Blok M is loaded with budget shopping malls. You will be able to shop at:

These are all within walking distance of Blok M MRT Station.

If you find that the area around ASEAN MRT Station doesn’t fulfill your needs, consider going to popular areas such as Blok M, Senayan, Sudirman or Senopati. They are all within a few kilometers of the station.

Driving from ASEAN MRT Station to the Airports in Jakarta

Getting from ASEAN MRT Station to Soekarno-Hatta

The distance from Stasiun MRT – ASEAN Station to Soekarno-Hatta International Airport is 31 kilometers and it will take you around 45 minutes to 1 hour.

Getting from ASEAN MRT Station to Halim Perdanakusuma

The driving distance from Stasiun MRT – ASEAN Station  to Perdanakusuma International Airport is around 15 kilometers and this should take you around 30 minutes to 45 minutes.