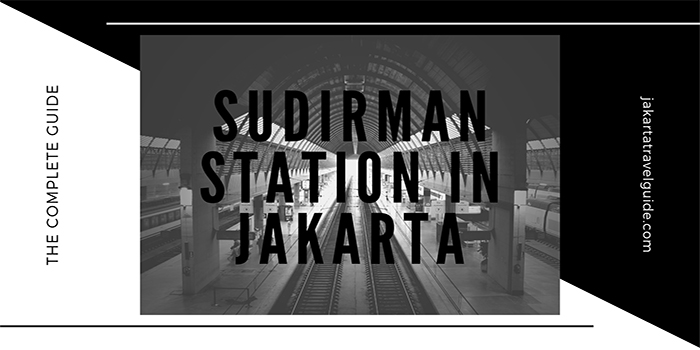 Sudirman Station, referred to as Stasiun Sudirman in Bahasa Indonesia is a commuter station which is ideally located in central Jakarta. It is is situated only about 1 km south of some of Jakarta’s most popular malls such as Thamrin City, Plaza Indonesia and Grand Indonesia.

Conveniently, it is also located close to some of Jakarta’s best hotels such as the Shangri-La.

You will also have access to public parks such as Taman Menteng, Taman Suropati and Taman Situ Lembang when you arrive at Stasiun Sudirman.

Although very close to other commuter lines, Sudirman Station is only a stop on one of Jakarta’s commuter lines: the Yellow Line.

The Yellow Line services trains from Jatinegara Station to Bogor, Nambo and Depok which are located south of Jakarta.

Connecting to the Jakarta Railink from Sudirman Station

It is also possible to transfer to the Jakarta Railink at Sudirman Station. Simply walk over to BNI Station to access trains that travel to and from Soekarno-Hatta International Airport.

What are the closest stations to Sudirman Station in Jakarta?

If you are travelling west, the distance between Sudirman and Karet Station is only about 800 meters. This is one of the shortest distances between any two stations throughout Jakarta’s commuter network.

If you are travelling east, the distance between Sudirman Station and Manggarai Station is around 3.2 km.

Since Sudirman Station is only part of the Yellow Line it is not possible to transfer lines while at this station. It is really easy to reach the transit stations from here, however.

Therefore, you can head east just 1 station and transfer to the Red or Blue Line from there.

You can travel north on the Red Line, you can reach the Monas area or Kota Tua – two of Jakarta’s most popular areas for sightseeing.

The Blue Line also services trains heading for the Monas and Kota Tua, but also southeast to Cikarang.

What is located around Stasiun Sudirman in Jakarta?

Stasiun Sudirman is conveniently located in central Jakarta, especially if you are interested in shopping or sightseeing around the Monas.

About 1 km directly north of Sudirman Station is the Monumen Selamat Datang.

This is a famous landmark in Jakarta that is surrounded by a large roundabout that has some of Jakarta’s best hotels (Grand Hyatt Jakarta, Hotel Indonesia Kempinski Jakarta, the Mandarin Oriental Jakarta and the Pullman Jakarta) overlooking it.  This is regarded as one of, if not the best location to stay while visiting the city due to its centrality and easy access to the Monas area.

Sudirman Station is also around 2 km south of some of Jakarta’s most famous public parks – Taman Suropati, Taman Menteng and Taman Situ Lembang.

Taman Suropati is particularly well known for its mature trees and carnival-like atmosphere during the evening hours on weekends.  Locals love to play music at night.

If you are interested in checking out antiques, the Jalan Surabaya Market is only 2.5 km away from Sudirman Station. You might want to check out this popular article that features a walking tour around these public parks and the antique market.

If you are interested in shopping while in this area of Jakarta, you’re lucky because the area around Sudirman Station has multiple high quality shopping centers within a few kilometers away.

You can travel 1.5 km directly north towards Monumen Selamat Datang and then turn left, to reach three of Jakarta’s most popular shopping malls: Grand Indonesia, Plaza Indonesia and Thamrin City.

Needless to say, there is no shortage of shopping opportunities available if you are near Sudirman Station!

Staying in the area around Sudirman Station is also a convenient choice with plenty of quality hotels nearby.

Driving from Sudirman Station to the Airports in Jakarta

The driving distance from  Sudirman Station to Soekarno-Hatta International Airport is around 33 kilometers and this should take you around 1 hour and 5 minutes to 1 hour and 20 minutes depending on traffic.

Getting from Stasiun Sudirman to Halim Perdanakusuma

The driving distance from Sudirman Station to Halim Perdanakusuma International Airport is around 48 kilometers and this should take you around 1 hour and 30 minutes minutes to 1 hour and 45 minutes depending on traffic.