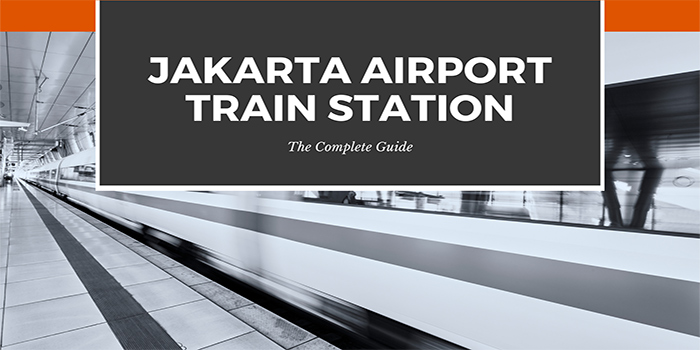 Everything you need to know about Soekarno Hatta Airport Train Station and Getting to Central Jakarta using the Airport Railink.

Now you can travel from the airport to central Jakarta in under 50 minutes without even worrying about traffic along the way.

In order to take the airport rail link from the airport to Jakarta, you first have to travel from your airport terminal to Soekarno Hatta Train Station. You might also hear this station called a few different names like Soekarno-Hatta International Airport Railway Station or SHIA for short.

The railway station at the airport in Jakarta is technically an integrated station that connects the Airport Skytrain to Jakarta Airport Railink.

The Airport Skytrain is a short train line that you can take to get to Soekarno Hatta Train Station from Terminal 1, 2 and 3. Once you land, just follow the signs in the departure area.

The Jakarta Airport Railink is the train service that you need to take to get to central Jakarta from the airport.

Soekarno-Hatta Railway Station is a modern, large building that has everything from restaurants to nursing rooms. This is also the place where you can buy tickets for trips from the airport to Jakarta (or vice versa). Trains depart from this station frequently (roughly 70 times per day).

Location: Between Terminal 1 and Terminal 2 at Soekarno-Hatta International Airport in Tangerang, Banten.

You can travel from this station to BNI City Station in central Jakarta in about 45 minutes on average. In the opposite direction from BNI City to the airport, you can expect it to take a similar amount of time.

If you connect with Dukuh Atas MRT Station and travel to Bundaran HI MRT Station you can add another 5-10 minutes to this journey time. This is right in the heart of central Jakarta.

You can purchase your ticket at one of the vending machines located on the departure level of the station. You can also access free Wifi in this area of the station.

There is a large departure screen that you can look at to get updates about your journey and when you will board the train. There is also some restaurants and convenience stores in the station. In the middle of the station, there is a large helpdesk. You can simply walk up to the personnel there and ask for help.

Here is a list of the services and facilities at Soekarno-Hatta Railway Station:

What is located around Soekarno Hatta Train Station?

Soekarno-Hatta Train Station is located between Terminal 1 and Terminal 2 of the international airport. Terminal 3 is slightly farther away (approximately 1 km).

There isn’t too much to see in terms of attractions, markets, malls or museums near the airport.

But there are some airport hotels that are quite close to the station. You can check them out if you are interested:

Cengkareng Golf Club is very close to the airport railway station. It is about 1 km east of the station. You can drive there in about 5 minutes.

If you are planning on sightseeing in the city, you are better off taking the airport train into central Jakarta. Most major attractions are located within 5 kilometers of the Monas – Indonesia’s National Monument.

As you can see above, the closest station to Soekarno Hatta Railway Station is Batu Ceper Station. Typically, tourists visiting Jakarta stay on the train until they reach BNI City Station.

This is located right in the heart of central Jakarta where you can easily connect with the MRT System and the Commuter Network.

The airport railink currently extends all the way to Bekasi. This is a smart decision that allows way more people to access the airport without traveling through extensive traffic.