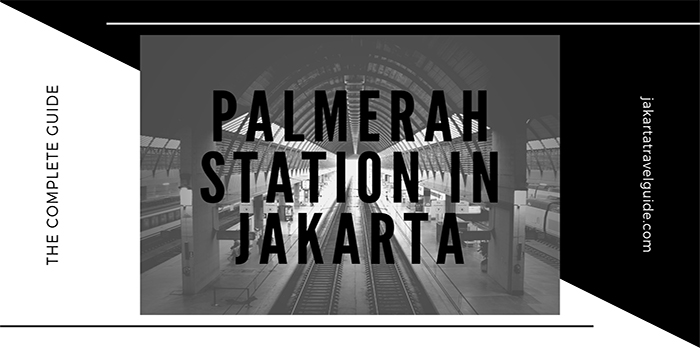 To be more precise, it is about 6 km southwest of the Monas and its surrounding museums.

Palmerah is the second station on the Green Line that connects Tanah Abang Station (which is located closer to the Monas) all the way to Rangkasbitung Station which is located about 85 km from Jakarta central business area.

Due to its proximity to Tanah Abang Station, Palmerah Station is considered to be in a strategic position that is close enough to Jakarta’s national monument and the business area in Sudirman.

Unfortunately, it isn’t possible to transfer between train lines when you arrive at Palmerah Station.

To get to the next closest transfer station, you will have to travel one station northeast on the Green Line to Tanah Abang Station.

Tanah Abang Station is one of the busiest stations in the commuter network with two lines connecting there – the Yellow Line and the Green Line.

Once you arrive at Tanah Abang you can transfer to the Yellow Line.

The Yellow Line services trains all the way south to destinations such as Bogor, Nambo and Depok.

Heading south on the Yellow Line is popular with passengers because it can be used to bypass Jakarta’s heavy traffic during peak periods.

Alternatively, you can travel north on the Yellow Line to Kampung Bandan Station and transfer one station over on the Pink Line to reach Ancol.

Looping around on the eastern side of central Jakarta on the Yellow Line will enable you to access popular market areas such as Jatinegara and Pasar Senen. Both of these markets are conveniently located within walking distance from their respective stations.

The closest station that you will reach is to the east is Tanah Abang. Tanah Abang Station is about 3.2 km away from Palmerah Station.

If you travel away from central Jakarta on the Green Line towards Rangkasbitung Station, then the next closest station to Palmerah is Kebayoran Station.

The distance between these two is slightly farther at 3.7 km.

It should, therefore, take you a similar amount of time to reach the next closest station to Palmerah Station regardless of the direction in which you choose to travel.

What is located around Stasiun Palmerah?

Stasiun Palmerah is not directly located near the Monas, but it still isn’t too far away from some of Jakarta’s best shopping and sightseeing districts.

Directly to the west of Palmerah Station is Pasar Palmerah – a traditional market. It is literally only about 150 meters from the station. It’s worth checking out if you are in the area.

In the opposite direction, to the east of the station is Museum Kehutanan Manggala Wanabakti.

This specializes in exhibits about forestry and wildlife in Indonesia.

Staying near Stasiun Palmerah is also a practical option considering that it is quite close to popular sightseeing and shopping areas such as Thamrin, Sudirman and Senayan.

Probably the best option to stay at near the station is Hotel Mulia Senayan, Jakarta. It is only 2.7 km away from the station which should only take you about 5 minutes by car. Mulia is arguably one of the best hotels in all of Jakarta and it has one of the best brunches that you will find in the entire city.

Another cheaper, practical option closeby is called Sawana Suites. It is only 1.8 km away from Palmerah Station and it should take you only 4 minutes to drive there.

Although farther away the station, the Fairmont Jakarta is closer to the sporting complex. Similar to hotel Hotel Mulia Senayan, Jakarta, the Fairmont is one of Jakarta’s best hotels with excellent service standards.

Either one of these hotels should provide high enough service standards to please even the most well travelled visitors to the city.

If you decide to stay at the Fairmont Jakarta, then you will be very close to five of Jakarta’s malls:

This is an added bonus of staying to the southeast of Stasiun Palmerah.

Driving from Palmerah Station to the Airports in Jakarta

Getting from Stasiun Palmerah to Soekarno-Hatta International Airport

The driving distance from Palmerah Station to Soekarno-Hatta International Airport is around 29 kilometers and this should take you around 35 minutes to 50 minutes depending on traffic.

Getting from Stasiun Palmerah to Halim Perdanakusuma International

The driving distance from Palmerah Station to Halim Perdanakusuma International Airport is around 14 kilometers and this should take you around 30 minutes to 45 minutes depending on traffic.

Send this to a friend